Sheila in A CHORUS LINE 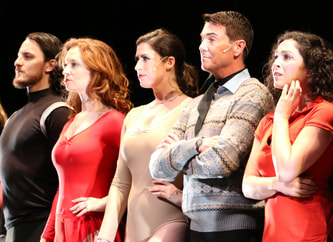 "So we learn about frequently unhappy childhoods where dance provided solace, whether At the Ballet (performed winningly by Danae DeShazer, Eliza Engle and Sarah Cassidy)... Kudos to Barrett, music director G. Frank Meekins and the design team for pulling off this challenging show." - Kay Kipling, Sarasota Magazine 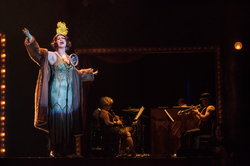 "Director and set designer Michael Newton-Brown captured that era’s excessive debauchery while showcasing some of the area’s top talents in surprising roles... Trying to write a novel, {Cliff} gets caught up in the club scene and winds up falling in love with British dancehall entertainer Sally Bowles (Danae DeShazer). Bowles seems to come close to returning his love, but alas, is one of the many doomed to pay the price of their excesses. DeShazer keeps getting better and better. She absolutely nails this role." - Kim Cool, Venice Gondolier

"﻿DeS﻿ha﻿zer﻿ struts her stuff well on her cabaret numbers and delivers both emotionally and vocally on the show’s title tune (backed by a strong orchestra led by Alan Jay Corey)."  - Kay Kipling, Sarasota Magazine

"﻿Danae DeShazer ﻿brings a lot of life to Sally, who doesn’t want to know about those political changes. She’s happy living hand to mouth in as grand a style as she can manage. There’s a zest to her “Don’t Tell Mama” and the title song and she plays with a touching earnestness in the more dramatic moments... In fact, the production is full of honest performances, even in the dark corners of the stage where club patrons watch the action. Everyone is connected."  - Jay Handelman, Sarasota Herald-Tribune

Edwin Drood in THE MYSTERY OF EDWIN DROOD 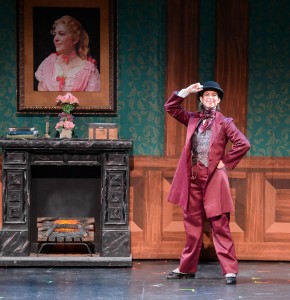 NAMED "NOT SUCH A MYSTERY" in SARASOTA HERALD TRIBUNE'S HANDY AWARDS
"Few shows were more beautifully designed or performed as the Manatee Players production of “The Mystery of Edwin Drood,” Rupert Holmes’ clever musical version of an unfinished Charles Dickens novel. A cast headed by Walter Price and Danae﻿ De﻿Shazer, looking gorgeous in David Covach’s costumes, and well staged by Scott Keys, drew the audience into the mystery and got us involved to vote for favorite characters to be suspects, victims and murderers." - Jay Handelman

"As the title character Edwin Drood/Alice Nutting, ﻿Danae D﻿e﻿Shazer﻿ again proves that she is one of the area's comic leading ladies."
- William S. Oser, Talkin' Broadway

"...the cast is one of the best... Among the standouts are Christoff Marse as the mustache-twirling villain John Jasper, Walter D. Price as the de facto narrator and Danae DeShazer as Drood." - Marty Clear, Bradenton Herald

"In the Manatee Players production of The Mystery of Edwin Drood, the mystery serves as an entree to a lively and colorful musical filled with personality and fun... He’s wrangling an impressive cast that includes an engaging Danae DeShazer as the title character. DeShazer plays a diva of an actress who specializes in male impersonation." - Jay Handelman, Sarasota Herald-Tribune

"newcomers Christoff Marse, as the Jekyll-and-Hyde-ish Jasper; Tristan Martin, as the seething Neville; and Michelle M. Spears, as the seen-better-days Princess Puffer, along with returning faces DeShazer, Eliza Engle as Rosa, Jason Kimble as Bazzard, and Michele Anaya as Helena shine at displaying villainy, innocence or duplicity, as the case may be." - Kay Kipling, Sarasota Magazine

GO BEHIND THE SCENES WITH DANAE ON THISWEEKINSARASOTA.COM

Violet Hilton in SIDE SHOW 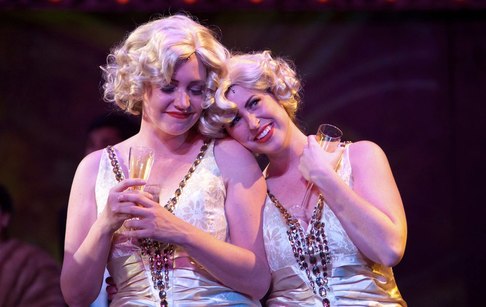 NAMED "BEST SISTER ACT" in SARASOTA MAGAZINE'S 2013 THEATRE AWARDS!
That would be Danae DeShazer and Alana Opie, thoroughly believable as conjoined twins struggling with the climb up the show biz ladder along with broken romances in the Players production of Side Show. They ran the gamut of emotions in numbers both funny and poignant, and did it “joined at the hip” for almost the entire show. - Kay Kipling

NAMED "ANYTHING BUT A SIDE SHOW" in SARASOTA HERALD TRIBUNE'S 2013 "HANDY AWARDS"
"Alana Opie and Danae DeShazer really worked side by side in the Players Theatre’s Side Show, playing conjoined twins Daisy and Violet Hilton, who were stars of circus freak shows and later in vaudeville, while battling each other over one’s desire for fame and the other’s need to fall in love. The actresses made an impressive musical pair and then parlayed their new-found friendship into an engaging cabaret show at Venice Theatre." - Jay Handelman

"In the Players Theatre’s beautifully designed production, those big numbers are sung with terrific strength and compassion by Alana Opie as Daisy and Danae DeShazer as Violet, who are joined at the hip as they pursue their dreams. Even as they move in perfect sync together, they emerge as individuals.  Daisy seeks the spotlight, while Violet just 'wants to be like everyone else.'" - Jay Handelman, Sarasota Herald-Tribune

"...Opie and DeShazer pour their hearts into the big ballads 'Who Will Love Me As I Am?' and 'I Will Never Leave You.' They make you fall in love with them, and you can’t ask much more from a performer." - Jay Handelman, Sarasota Herald-Tribune

"...at the heart of the show is the relationship between the twins, played to near-perfection by Alana Opie (Daisy) and Danae DeShazer (Violet), and their search, not just for the spotlight, but for love. Of course true love isn’t easy to find for any of us, and that makes it easy to relate to their wish to find someone Who Will Love Me As I Am, the show’s Act I closing anthem, which is rendered with emotion and skill by the lead actresses." - Kay Kipling, Sarasota Magazine

"a number of lovely duets in which the many gifts of DeShazer and Opie shine most brightly." - Paula Atwell, The Observer 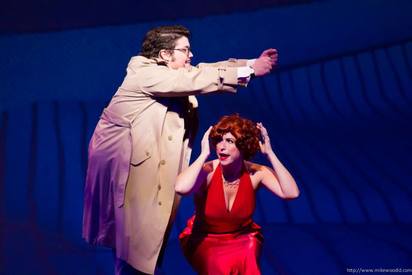 "Danae DeShazer is a delight as Elizabeth, the sexually repressed but sprightly fianceé of Dr. Frederick Frankenstein. She conveys all her mixed-up feelings (and signals) in 'Please Don’t Touch Me' early in the show." - Jay Handelman, Sarasota Herald-Tribune

"DeShazer, who was also in 'Les Mis,' turns in a fine performance at the dock as Frederick is about to leave the U.S. and then brings down the house with her portrayal of a totally different Elizabeth once she has arrived in Transylvania and met her match - the Monster match. ('Tis the season for bad puns). DeShazer can vamp with the best of them and in her red and then beige dresses, she is as stunning as she is talented." - Kim Cool, Venice Gondolier Sun

"Finnerty wisely doesn’t try to imitate Wilder as Frederick in any way, but he’s got his own manic energy to work with, and he’s well matched by DeShazer (who’s hysterical in her tryst with the Monster)" - Kay Kipling, Sarasota Magazine

Hedy LaRue in HOW TO SUCCEED...

"The women are strong in this show... But none could match in terms of character or vocal performance, the va-va-voomph of Danae DeShazer’s buxom Hedy LaRue. From tip to toe, and D to double D, DeShazer was a knock-out." - Gayle Williams, AnythingArts.com

"Timothy J. Fitzgerald mixes pomposity with a sense of a little boy seeking comfort as the overly-taxed president J.B. Bigley. He shares a comically intimate moment with Danae DeShazer as his squeaky-voiced mistress, Hedy LaRue, who puts flair into a tender shimmy during 'Love From a Heart of Gold.'" - Jay Handelman, Sarasota Herald-Tribune 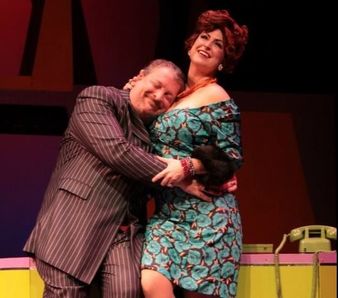 "DeShazer belts with gusto in Show Off, where this supposedly retiring performer demonstrates every trick in her bag, including some impressive acrobatics... The Drowsy Chaperone is a pleasure to watch and hear, and should be the cure for what ails you."
- Kay Kipling, Sarasota Magazine

"The stage is filled with appealing performances, from the sure-voiced Danae DeShazer as ingenue Janet Van De Graaff... It all adds up to a fun evening, that might leave you a bit wistful for shows of a bygone era and thankful that a new age of writers can still capture that spirit." - Jay Handelman, Sarasota Herald-Tribune

"Tony Howell and Danae DeShazer play the young couple facing many challenges on their wedding day. They both sang and danced beautifully. It was a pleasure to watch them." - Jean Trammell, Venice Magazine

NAMED 2011's CRITIC'S CHOICE BY SARASOTA MAGAZINE for BEST DOUBLE DOSE OF NOSTALGIC FUN
"First, the Golden Apple offered its production of the Broadway Tony winner The Drowsy Chaperone, a delightful, affectionate spoof of a typical (but fictional) 1920s musical hit, last summer. Then Venice Theatre presented its highly entertaining version a couple of months ago. Both gave us great casts (especially love both those Men in the Chair, Michael Bajjaly and David P. Brown, and both those multitalented leading ladies who supposedly don't want to "show off" anymore, Leigh Ann Wuest and Danae DeShazer) and a boatload of fun."

SUZY in THE MARVELOUS WONDERETTES
"...and Suzy played by Danae DeShazer – are a perfect mix of talented and comical... Above all, these four ladies can sing beautifully (and even moreso together), making it all the more fun to hear these classic songs once again." - York County Coast Star, SeacoastOnline.com
VIVIENNE KENSINGTON in LEGALLY BLONDE
"As Warner's fiance Vivienne, Danae DeShazer plays the part of an uptight, conservative easterner convincingly, and her powerhouse vocals help set the tone for the second half of the show." - York County Coast Star, SeacoastOnline.com

Brooke Ashton in NOISES OFF!

"Danae DeShazer shines as the ditsy, lingerie-wearing ingenue Brooke Ashton... So, there you have it. Nine actors working with a most capable director off an excellent script to deliver laugh-out loud theater." - Wade Tatangelo, Bradenton Herald

"The ingenue Brooke (played by Danae DeShazer) is so ditzy (and prone to losing her contact lenses) that even when things are spiraling out of control, she obliviously plows through as everything is normal, further throwing off her bewildered co-stars... The cast creates a terrific ensemble of actors trying to survive the debacle of 'Nothing On.'"- Jay Handelman, Sarasota Herald-Tribune